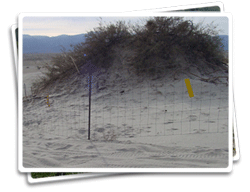 The focus of the Park's conservation projects involves enclosing areas of sensitive habitat or special natural features, such as the mesquite dune habitat which occurs sporadically throughout the Park. This critically important habitat, while referred to as a "dune," actually consists of small mounds of sand called hummocks. Unlike larger dune areas these small hummocks, which are held in place by larger vegetation, are negatively impacted by riding. Fencing is necessary to preserve the habitats and to allow impacted areas time to rejuvenate. Fenced-in areas of this type include Barrel Springs, County Line, Morton Dunes, as well as some smaller areas throughout the Park.

In 2008 an Environmental Scientist successfully germinated a large number of native plants, and a fortuitous rain event gave him the opportunity to transplant approximately 85 plants in several of the fenced-in hummocks. When the transplants become established, they will stabilize new dune accumulations.

Another category of sensitive habitat includes water sources. Springs, which tend to occur in heavily traveled areas along a fault line through the Park, are fenced in to protect them and the wildlife utilizing the water resource.

Enclosed special natural features include Shell Reef and the Palo Verde Fossil Beds (both contain large accumulations of marine fossils), Gas Dome (where water bubbles with pressurized gases from deep below ground can be found) and the Cove (a rocky mesa at the base of Borrego Mountain). 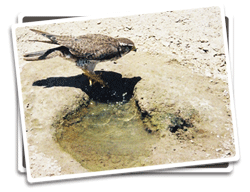 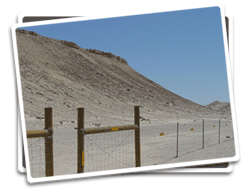