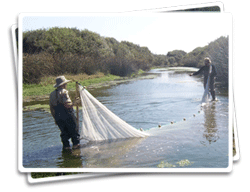 Surveys to monitor and provide management recommendations about the fisheries of lower Arroyo Grande Creek occur several times per year at Oceano Dunes SVRA. In 2008, eight fish species were identified including the federally-listed endangered tidewater goby. One of the techniques used to identify species is seining as demonstrated in the photo shown on the right. 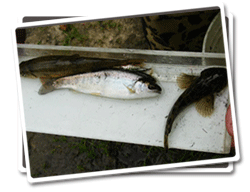