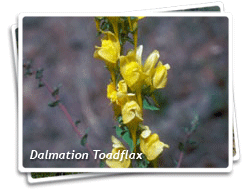 The Invasive Plant Control Project at Hungry Valley SVRA focuses on controlling invasive exotic plants in the native grasslands area. The two invasive plants of significant concern are the Dalmatian Toadflax (Linaria dalmatica) and the Yellow Star Thistle (Centaurea solstitialis). Both species are on California's A-Rated Weed List and pose an imminent threat to the grassland habitats at the Park.
Facts About the Dalmation Toadflax
Facts About the Yellow Star Thistle 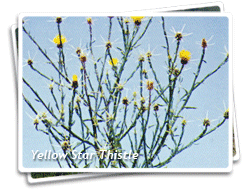 One of the implemented programs to control the invasive species in the Park, involves spraying the weeds with herbicide. Biocontrol is used in the grasslands area by the California Department of Food and Agriculture in an effort to control the Toadflax problem. In addition, UC Davis has selected a Toadflax infested plot and is experimenting with different concentrations of herbicides.

After battling these invasive plants for several years, it has become apparent the Park's grasslands are highly susceptible to these invaders. The Invasive Plant Control Program will need to be maintained annually in order to have any chance of success in eliminating these invasive species, and over time, research will prove which method works best.