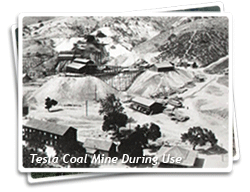 The Tesla Coal Mine and surrounding mining landscape is currently being documented and studied at Carnegie SVRA. This landscape is one of the OHMVR Division's best known examples of a cultural landscape. The Tesla Coal Mine represents one of California's first commercial coal mines. The exploration of coal began in 1855; however, after a series of failures the mine was closed and then reopened by John Treadwell in 1889 and named Tesla Coal Mine.

From 1896 to 1905, Tesla was the largest coal producing mine in California. Clay extracted at Tesla was used to manufacture Carnegie bricks and pottery products which were manufactured at the Carnegie Bricks and Pottery Company, also located at Carnegie SVRA. In 1902, Tesla sand was used in the first window pane factory west of the Mississippi. 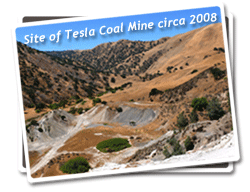 In the early 1900s, a number of disasters such as the 1906 earthquate, repeated flooding and boiler rooms explosions, and the collapse of the bank providing financial backing to the operation forced the closure of the Tesla mining operation and the Carnegie Bricks and Pottery Company. Following this series of misfortunes, Carnegie was sold in 1916 at auction to a competitor who dismantled the machinery and tore down the plant.

Today, all that remains of the Tesla Coal Mine is a large mound of mining refuse, mining adits, and a series of house pits from the town of Tesla. In addition, the Carnegie Brick and Pottery Company's legacy can still be seen in stately buildings such as the Oakland Hotel, the Los Angeles Natural History Museum, and the Carnegie Libraries in Livermore and Lodic. Each of these remaining cultural resources tell a story about the ingenuity and persistence of American life in an otherwise unforgiving environment. 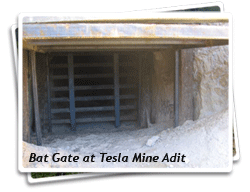 In addition to the Tesla Coal Mine, three other mines are also located in Carnegie SVRA—Ryan Clay Works, Summit, and the Tesla Clay Works.

We are working with other state and federal agencies on closing many of the mine adits due to concerns about public health and safety. The desired method of closure is to install a bat gate over the front which allows wildlife movement while ensuring public safety.