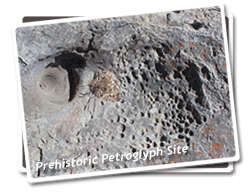 The historic, prehistoric, and ethnographic histories of areas in Carnegie SVRA include many complex elements, all of which need to be highlighted in the resource element of the SVRA's future general plan.

Carnegie SVRA, located in the Twin Cities District, has contracted with the Anthropological Studies Center (ASC) at Sonoma State University to inventory the multiple resources within Carnegie. Division archaeologists have had the pleasure of working with the ASC staff during a number of archaeological field surveys. The ASC's completed inventory will serve as an important document in the management and interpretation of the SVRA's cultural resources.

Additionally, several graduate students at Sonoma State University have found the mining history of Carnegie compelling enough to use as research projects.