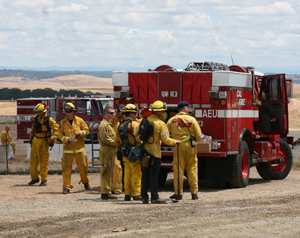 The Prairie City SVRA Resource staff and the OHMVR Division Resources Section initiated a controlled burn at Prairie City SVRA on May 29 and 30, 2013. The burn of approximately 180 acres of grassland is part of the Park’s 36-month vegetative management plan with the California Department of Forestry (Cal Fire). The low-intensity burn was prescribed to remove invasive grasses and the associated residual dry matter left behind after many years of no disturbance on an extensive vernal pool complex.

The two-day fire operation was conducted by Cal Fire with collaboration from the Sacramento Metro and City of Folsom fire departments, as well as assistance from the California Department of Parks and Recreation burn team from the Sierra District. 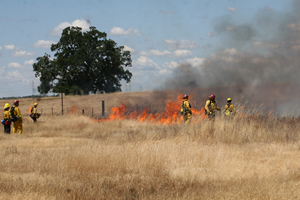 The fire removed most of the existing invasive plants and all residual dry matter. All native trees and bushes were protected from the fire.  Future prescribed burns will be dependent upon the viability of the seed reserve of invasive species found in the ground of the burned plots.