Each year the California State Parks' K-9 teams meet at a Qualifications and Competition event where they must satisfactorily complete a series of drills which include obedience, indoor and outdoor searches, protection, and tracking.  At the end of the two-day event, two awards are presented – the Dave Graham Achievement Award and the Mike Callan Top Dog Award. The Achievement Award is presented to the K-9 team who demonstrates the most consistent improvement throughout the year.  The Top Dog Award is presented to the team demonstrating the best discipline, teamwork, and overall skills.

Ranger Kenney and 'Kilo' have been a K-9 team since 2007 and work at the Twin Cities District's Clay Pit and Prairie City SVRAs. K-9 'Kilo' is trained in officer protection, suspect apprehension, searching, tracking, and narcotics detection. 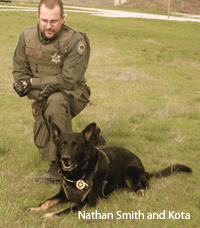 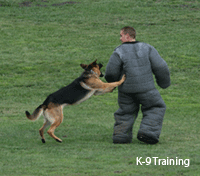 The OHMVR Division K-9 program not only serves the public as a well-documented crime deterrent, they are also a powerful educational tool. The teams participate in numerous interpretive events throughout the year and have been seen by hundreds of school children, fair visitors, campers, and Jr. Rangers.