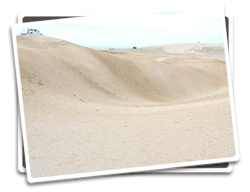 Dune stabilization at Oceano Dunes SVRA started in the late 1980s in an effort to protect Oso Flaco Lake from being filled in with moving sand. It was determined through the use of test plots that the best stabilization method was to blow hay over the area and till it in over the barren landscape. (The photo on the right shows the barren terrain and how the topography varies in height and slope.)

After the hay was scattered, a combination of seed, fertilizer, and temporary cover crop was evenly distributed throughout the area. Native plants, sprouted from seed collected on site and grown in Ocean Dunes SVRA's greenhouse, were planted.
Some slopes were hand-punched to stabilize sand where conditions would not allow heavy equipment access. The photo on the right shows the hay and sprouted cover crop. 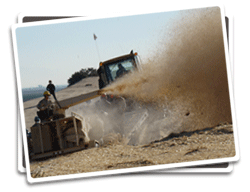 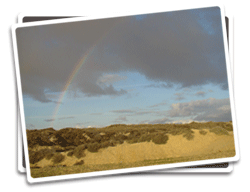