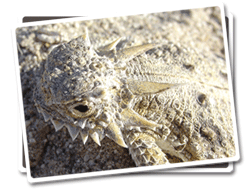 Ocotillo Wells SVRA was a founding member of the Flat-tailed Horned Lizard Interagency Coordinating Committee (ICC) and continues to be an active participant. The ICC coordinates the conservation efforts being made for the flat-tailed horned lizard (Phrynosoma mcallii) which is the rarest of the horned lizards with the smallest range. It is yet to be named an endangered species although it is deemed a species of concern by most agencies. 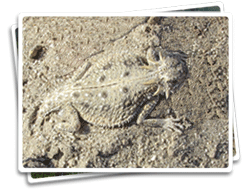 There are two monitoring protocols currently being implemented as a part of the ICC program. Each designated management or research area is asked to conduct two Sentinel Plot Surveys and 120 Occupancy Plot Surveys. The Sentinel Plot Survey is an exhaustive two week search of a selected nine hectare region where each detected flat-tail is implanted with a scannable PIT tag for future identification. An Occupancy Plot Survey is conducted by having at least three person/visits (three independent searchers at the same time qualifies) to a four hectare plot for one hour looking for individuals or the presence of scat. The surveys are conducted from late May through mid-September. 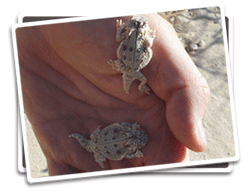 Ocotillo Wells SVRA completed its quota of 120 Occupancy Plots successfully in 2008. Due to the substrate and possible behavioral differences in the Park's population, the Sentinel Plots have not been productive. Therefore, that protocol will be abandoned in 2009 in favor of increasing the number of Occupancy Plots and testing some experimental ideas which may improve detection techniques.