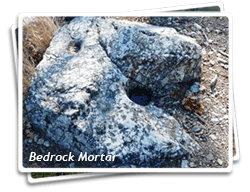 Archaeology is the study of past cultures and the way people lived based on the things they leave behind. Buildings and structures, historic landscapes, and cultural preserves represent only a small facet within the broad spectrum of California's richly diverse past. Having these "touchstones of history" give today's citizens a sense of place in the modern world. They represent a heritage legacy handed down to us, the stewards of these places.

Not all cultural materials will survive over time. However, by process of association, artifacts which endure in the archaeological record help identify the manufacture of cultural items which have since disintegrated. Baskets rarely survive in the archaeological record. However, tools used during basketry making such as bone awls preserve well. The presence of awls in a deposit would lead archaeologists to the conclusion that basket-makers, generally women, were present at the site. Furthermore, grinding stones, for example manos (handstones), metates (grinding slab), pestles, and mortars are found in many California archaeological sites. The presence of these artifacts normally suggests food preparation was taking place in the area, normally by women. 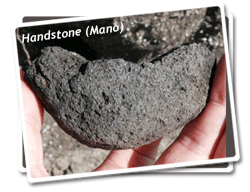 It is very important when an artifact is found that it is left in its original place until an archaeologist can look at it. If it is moved, all information which could be gathered from the object and its surroundings may be disturbed. Looters or "pothunters" are very destructive to archaeological sites. When encountering an archaeological site, they might think they have discovered a treasure, but the damage they do to a site by collecting artifacts for personal gain is irreparable. When an artifact is removed from a site, the information an archaeologist can learn from the site goes with it, and therefore is lost forever. Thus, archaeologists consider archaeological sites to be similar to that of an endangered species because they are fragile and nonrenewable. The importance and sensitivity of cultural resources makes the archaeologist's mission to protect and preserve resources for future generations very important. 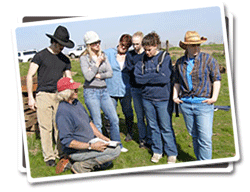 The great thing about archaeology is that it tends to borrow from many disciplines (i.e., history, California Indian studies, geography, geology, environmental studies and math); therefore, archaeologists can relate many topics at once. Everyone can interpret the past differently. Some people use history books or old photographs to define the past, whereas other people use oral stories to retell their history. Therefore, knowledge from Native American tribes is invaluable and archaeologists cannot properly study the past without help from the tribes. Archaeologists do not claim to have the one and only view to the past and rely on Native California groups, specialists from a multitude of disciplines, and the public when they draw their reconstructions.